The CKByte Issuance Model of Nervos

2.3.2 Steady State and Its Features

CKByte, which is native to Nervos blockchain, possesses the common properties of a token. It serves as a method of payment (i.e. medium of exchange), a unit of account and an economic incentive for the economic activities within the Nervos ecosystem. In that sense, it is in its essence not different from BTC or ETH.

CKByte is unique on three fronts, that is, utility on Layer 1, value capture on Layer 2, and risk-free interest rate enabled by NervosDAO. Due to the three peculiarities, the price of CKByte (in fiat money terms, similarly hereinafter) is inherently stable, which enables it to be a store of value.

On the Layer 1 of Nervos, data storage has a cost. It costs 1 CKByte to store 1 byte of data. The Layer 1 can be compared to a collection of arable land, and data storage is like planting crops on the land. Hence, 1 CKByte corresponds to a unit of land. This is why CKByte is considered to have the properties of an estate as pointed out by Wang et al. (2019).

The data stored on the Layer 1 is publicly available and cannot be tampered with. And CKByte is a kind of scarce resource due to its issuance model (see part 2). Therefore, storing data on the Layer 1 of Nervos can bring utility to the data owner. The utility depends on how valuable the data is to its owner. The higher the value is, the higher the utility is. For example, given the same storage space, storing one’s personal honors undoubtedly provides higher utility than storing stale gossips.

As Wang et al. (2019) pointed out, how Layer 1 can capture the value from Layer 2 was also a problem for the blockchain industry. It is the participants of Layer 1 that provide underlying security. If they fail to benefit from the growth of Layer 2, they will be discouraged from doing their job, which can in turn impede the growth of Layer 2.

Generally, CKBytes are held in three ways. First, they are used to store data and go out of circulation. Second, they are in idle state and stay liquid, such as those deposited in crypto exchanges. Third, they are kept by holders, who are not intended to sell. As for the third case, it is recommended to lock CKBytes in NervosDAO and earn interest (more on that in the second part). The return on CKByte deposits is what we call the risk-free interest rate of NervosDAO. It should be noted that locking CKBytes in NervosDAO does not free holders from the price volatility. Hence, the risk-free interest rate of NervosDAO is largely different from that of fiat money (i.e, government bond yield).

The deposit mechanism has two benefits. On the one hand, it can ensure the hodlers suffer no loss due to the dilution incurred by the newly-issued CKBytes (For details, see the second part). On the other hand, to earn the risk-free interest rate, some holders may remove their CKBytes from circulation for deposits, which can help decrease the effective supply of CKByte and support its price.

To sum up this part, a comparison is made between CKByte and other assets from the perspective of properties (payment/utility/securities), supply and demand side, and price stability mechanism in the Table 1, which is shown below:

Table 1: A Comparison between CKByte and Other Assets

Third, storing data on Layer 1 requires a fee. On the one hand, those who store the data on Layer 1 should pay a fee on an ongoing basis for occupying the storage space of Nervos system, which is similar to the state rent on Ethereum. On the other hand, PoW miners ensure the security of Layer 1, whose value is directly relevant to the size of data stored on it. In theory, the more data Layer 1 stores, the higher rewards PoW miners should receive. The secondary issuance of CKBytes serves the above two purposes. If holders use their CKBytes to store data, they will be excluded from the secondary issuance. Hence, their CKBytes will be constantly diluted by the secondary issuance. In other words, these holders have to bear the cost of occupying storage space by paying an inflation tax. Besides, the proportion of CKBytes distributed to PoW miners in the secondary issuance is equal to that of CKBytes used for data storage.

Fourth, holders are allowed to deposit their CKBytes into NervosDAO for rewards so that their holdings will never be diluted by the secondary issuance. The rewards enable Nervos system to achieve a steady state, which can eliminate the dilution effect of the secondary issuance (more on that below).

Fifth, the CKByte issuance model can hardly work without the consensus protocol of Nervos. Nervos’ consensus protocol has three fixed target values (Zhang Ren, 2018). They are (1) the length of difficulty adjustment period (which is called epoch), (2) the number of CKBytes issued per epoch (which is measured in CKBytes), and (3) an orphan rate. The Nervos system dynamically adjusts the number of blocks mined per epoch and the amount issued per block according to the three fixed target values.

Overall, CKB’s token issuance model shares not only plenty of similarities, but also many key differences with Bitcoin’s (see Table 2).

The following mathematical expressions use the same symbols as Nervos Network (2019a) in order to make the theoretical analysis more in line with the engineering implementation. 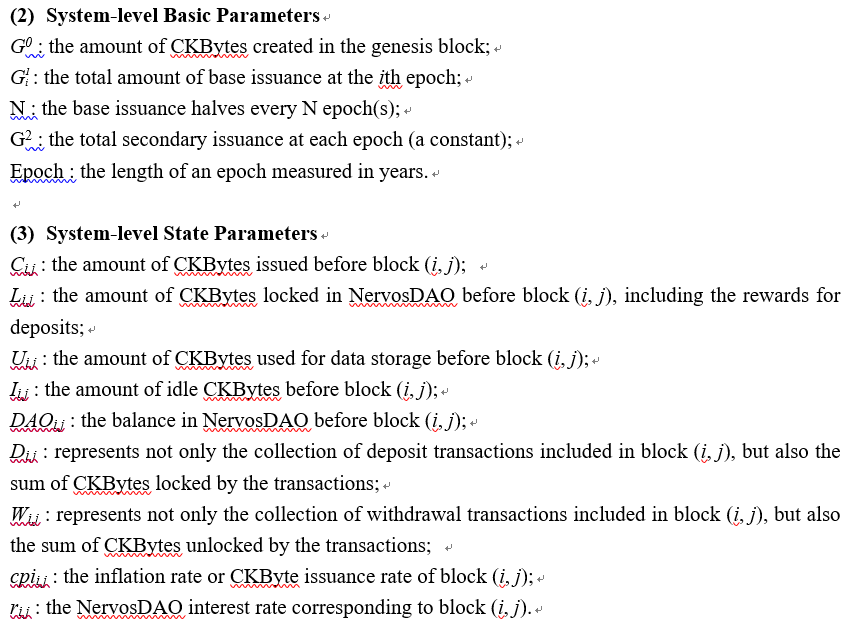 The following variables iterate every time when a new block is mined and are initialized in the first place:

Base issuance takes the following form: 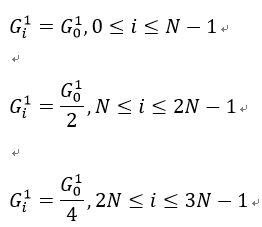 It can be generalized as:

The amount of CKBytes locked in NervosDAO (including rewards) follows the iterative equation below: 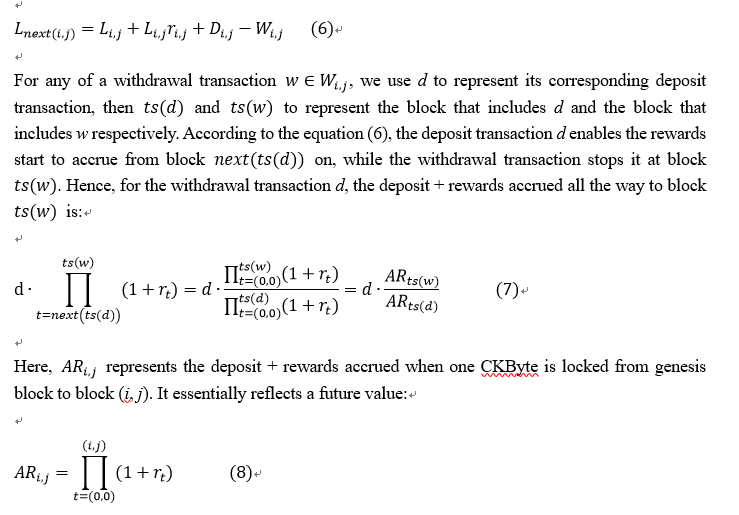 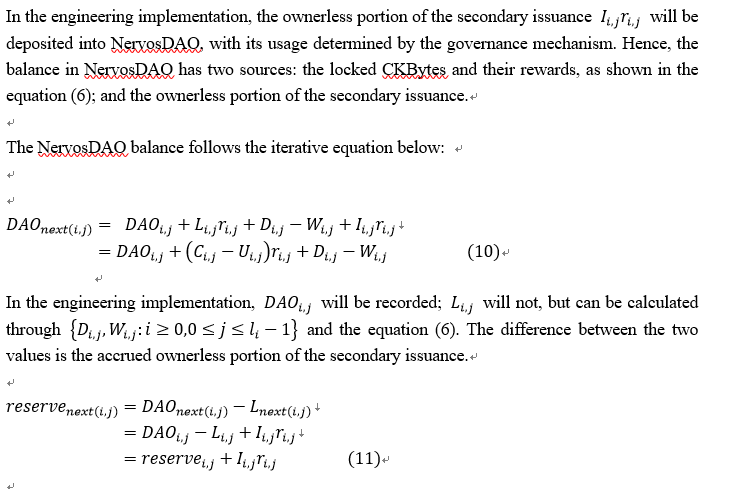 The equation (12) implies that the secondary issuance matters more to PoW miners after the ith epoch.

2.3.2 Steady State and Its Features 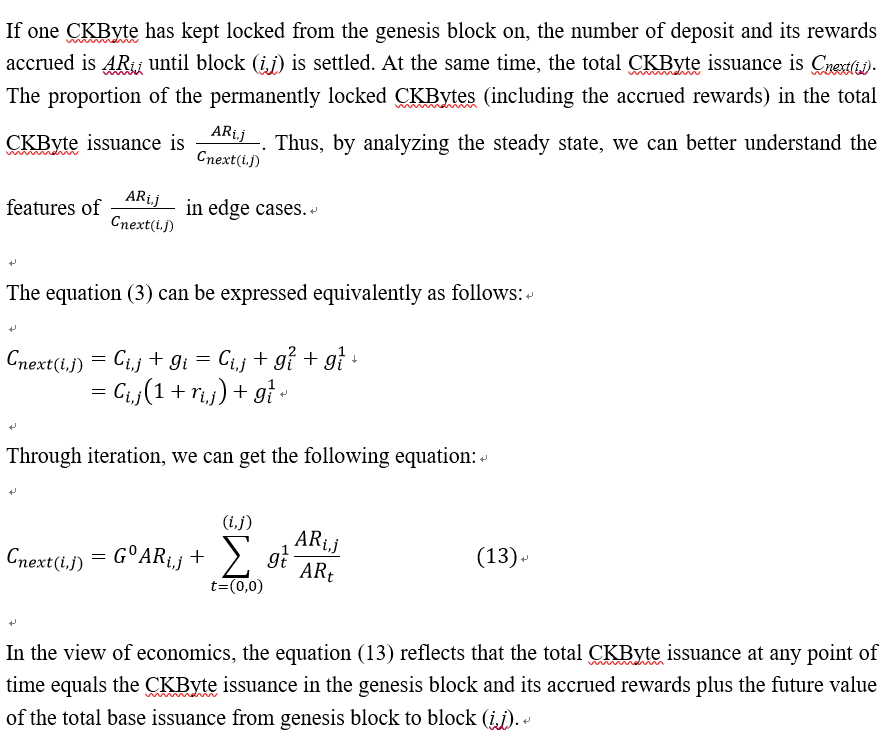 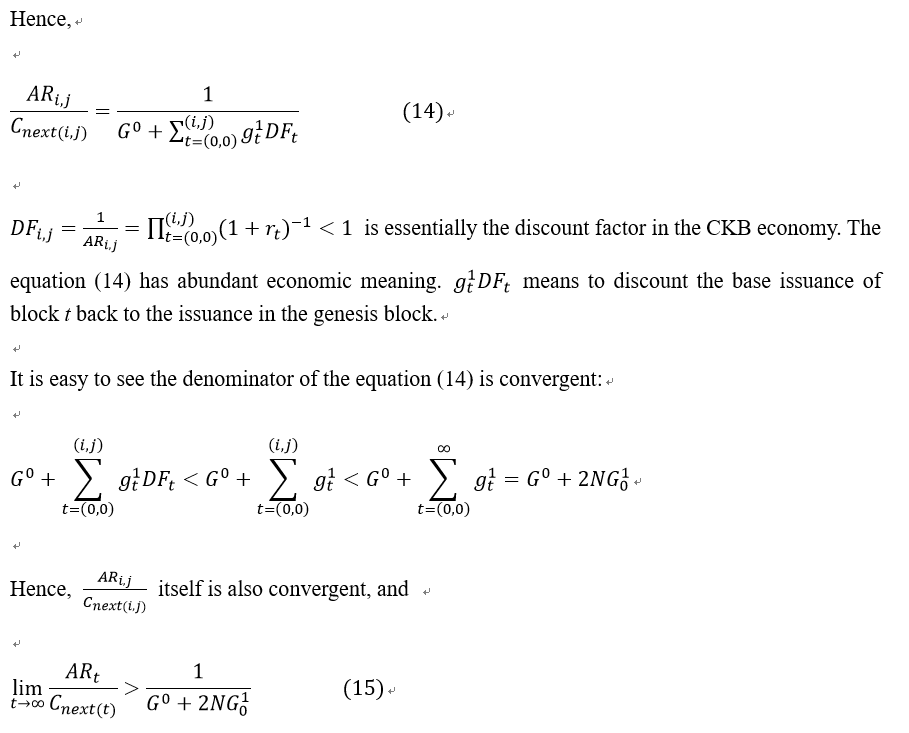 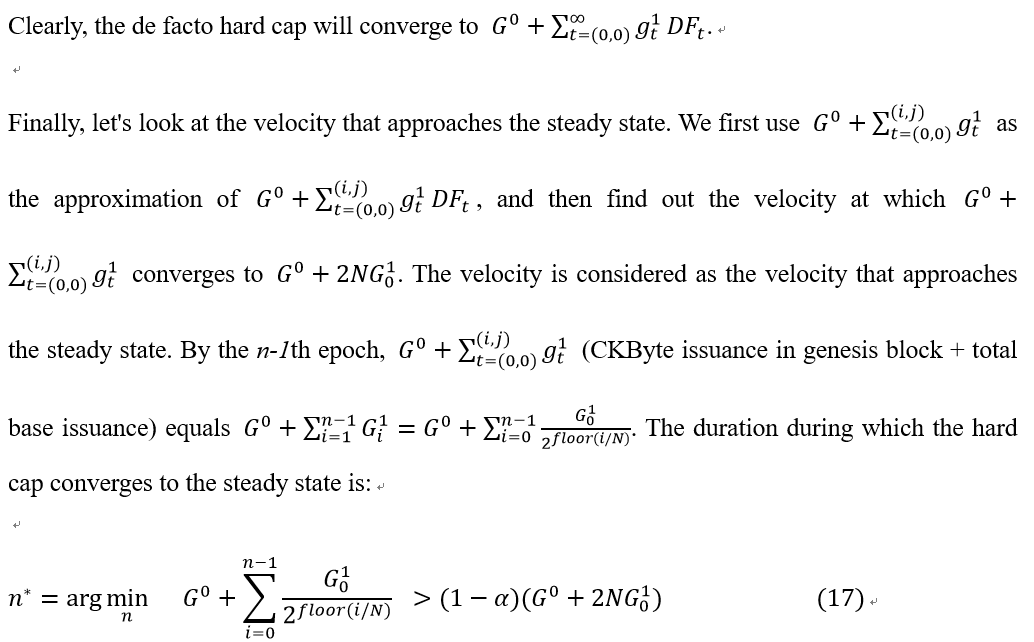 As long as a value is given to Epoch, key parameters in the CKByte issuance model can be calculated with the equation (17).

Let us take a look at the test results when the value of Epoch is 4. 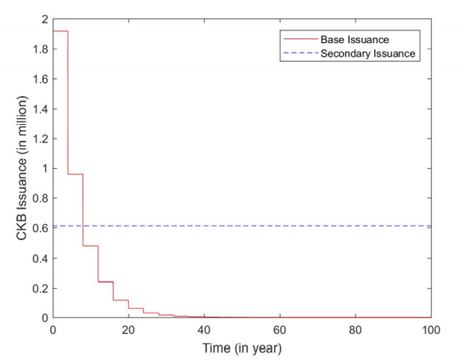 Figure 1: Base Issuance and Secondary Issuance

The figure 2 shows the inflation rate and NervosDAO interest rate at different points of time (They are both annualized). The former is always higher than the latter, but their difference will narrow down over time. After the mainnet has released 36 years, the inflation rate and NervosDAO interest rate will be basically the same (Their difference should be less than 1 basis point according to the standard). 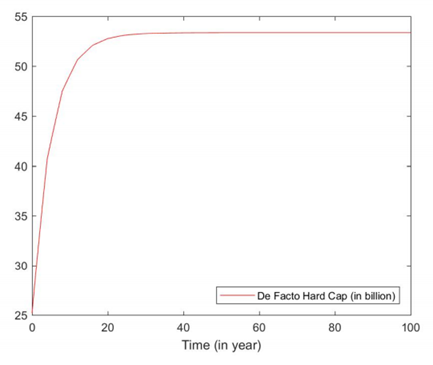 This paper is a technical supplement to Nervos’ crypto-economic paper drafted by Wang et al. (2019). First, it discusses the economic properties and the intrinsic price stability mechanism of CKB. Then, based on the key points of CKByte issuance model, it provides the mathematical expressions and analyzes the features of a steady state. Finally, a numerical test is conducted on the CKByte issuance model. With the help of this paper, the Nervos community can better understand how innovative the CKByte issuance model is as well as its economic meaning and features.