Note: This is old Tide Protocol

The old protocol is a stablecoin ( borrowing) protocol.
the new protocol at here

The Nervos ecosystem is still in the early stages of development and a lot of infrastructure needs to be developed.
Looking back over the years of the rapid development of blockchain technology, it’s easy to see that the token economy has played a major role in the development of the blockchain. Since last year, Defi has started attracting a lot of attention and the Nervos community has been looking at the Defi area, and it’s not hard to find some discussion about Defi in the community. Defi is an area that can help a public blockchain build a great ecosystem, but due to the imperfect infrastructure of Nervos, no interesting Defi applications have been created yet, so our team thought we should develop a Defi infrastructure for Nervos: stablecoin protocol.

MakerDAO, while an excellent stablecoin solution, introduces unpredictable human factors into the design of its cleaners and auctions(This led to MakerDAO’s Black Thursday). Unlike MakerDAO, Tide is a Liquidity protocol on Nervos that will result in fewer human factors, better borrowing, and stablecoin design, and lower collateral ratio!

The Tide protocol, with good liquidity and low collateral ratio, will be the cornerstone of Nervos Defi, and the stable price will be the breeding ground for other more interesting Defi protocols. Tide allows users who have never known Nervos before to experience ckb swap with UDT and get a better impression of the Nervos Defi.

Nervos CKB’s unique Cell model enables the development of complex applications, we will continue to pay attention to proposals related to the Nervos ckb programming model and UDT, and modify this proposal in the future.

Read this article for a better understanding of the Tide protocol 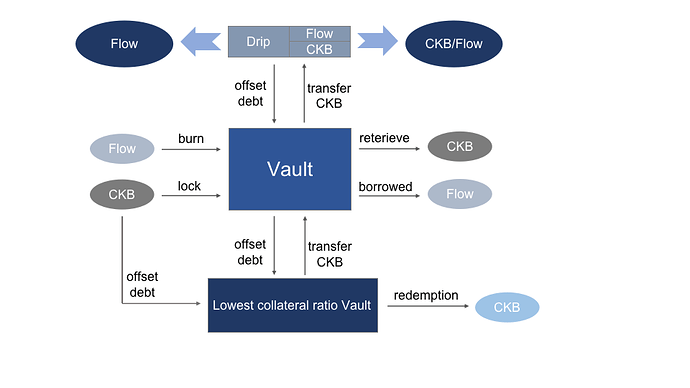 When the collateral ratio of a vault in the system is less than 110%, the liquidation mechanism is triggered

Create a cell to store CKB, and send flow to borrower

Create a cell to store a list of collateral ratio, CKB counts for vaults in the tide system.

Obtain CKB from the vault(s) with the lowest collateral ratio.

Create a cell to store information about drips.

Create a cell for locking the flow and possible CKB to be obtained, and add drip information to stability pool.

After retrieve CKB/flow from drip, remove this drip information from stability pool.

8. Destroy the flow from stability pool:

Send collateral CKB to drip from liquidated vault, destroy flow in this drip, update information for drip in stability pool and vault meates.

Distribute vault’s debt and CKB to vaults with the collateral ratio higher than 150%, update liquidated vault and update vault metas

There are two input and three outputs

There are one input and two output

There are four inputs, six outputs

There are at least three inputs and four inputs

There are one input and two outputs

There are two input and three outputs

8. Destroy the flow from stability pool

There are at least six inputs, at least five outputs