The GrowFi team is currently developing a DeFi infrastructure, including the fundraising model Growdrop, interest derivatives and DeFi aggregate. Growdrop has already released an Open Beta version(Ethereum). Our goal is to enable DeFi to expand financial inclusion, which has not been possible with centralized financing.

The GrowFi team has been running the Nervos Korean community for the past year, and we have written development research and content on various Nervos and made it known to Korea. Philosophy like Nervos PoW, layer architecture has inspired us a lot and we want to make this philosophy public. So in order to contribute to Nervos decentralized ecosystem, we want to create a ﬁnancing that anyone can participate in DeFi infrastructure on top of Nervos. Our development proposal is as follows.

This is a proposal to ease the DeFi ecosystem and user entry on Nervos. CKB chrome extension wallet, UDTswap, Growdrop can be a great help for the entire Nervos ecosystem, not just GrowFi. We will be able to experience Nervos through a simple UX for users and developers.

Which allows users to easily access these sites. Currently, Nervos wallet requires node by default. We’ve already seen a lot of things that make it harder for users to run nodes, access open nodes, and manage keys. To do this, you can use wallet anywhere in the world with Chrome, and we suggest wallet that users don’t need to know what nodes are.Of course, for this wallet, the node must also be operated, and depending on the number of users, this node must distribute the transaction to the node and also manage the ongoing management of Nervos updates.

We need to provide an easy development environment as the Nervos Dapp ecosystem grows. We provide a Nervos full node API to ease the development burden.The infrastructure for Nervos & Web 3.0 apps is much easier to access. 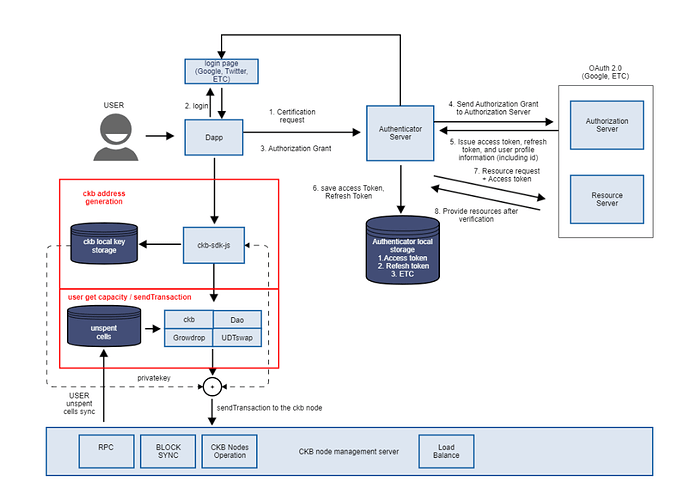 When a user arrives at a DApp, the javascript client is loaded. From there, a user logs in, they provide proof that they are logged in, and the proof is verified by server individually. This proof is integrated with the modern OAuth 2.0 Token Authentication flow. For new users, servers will assign a new key share from the pre-generated set of key shares, and store this assignment in an internal mapping. For returning users, servers will look up their internal mapping and return that user’s corresponding key share.​

A typical workflow is as follow, detailed flowchart please refer to next section:

It also runs CKB full-node offerings, such as the Ethereum Infura service, within the team, allowing you to quickly load Unspent cells and provide a good UX to your users without having to block-sync. For developers, our Infura service will reduce the barriers to development and give them convenience.

Roadmap:
We propose a 8 month timeline, with 3 checkpoints.

we will be able to trade tokens for Nervos scalability to make it easier for investors and users to enter. This requires a trading site that is easy to list and exchange. This enables users to experience various Nervos environments.​ As the Nervos ecosystem expands in the future, Layer 2 and Dapp will offer tokens a liquidity pool of UDT swap (x * y = k models) to create new business models through fees. The price of the token is also determined by the size of the liquidity pool.

We also focus on the token interface (UDT) of the Nervos network, and we know that the Nervos community is already actively discussing UDT. We will modify this proposal and continue working. 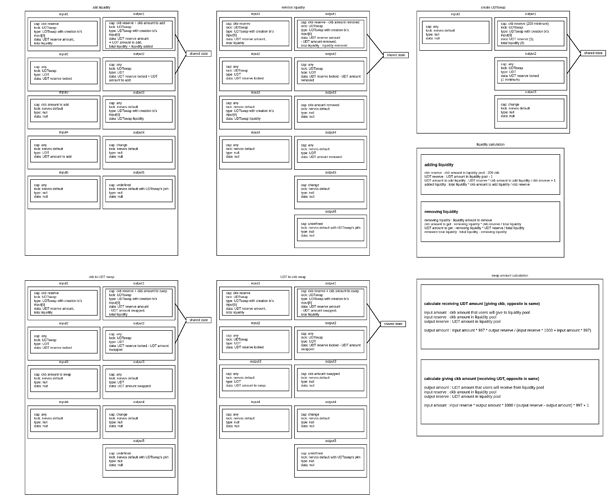 The UDTswap type script will check for other content.
There are five kinds of transactions.

Create UDTswap
Create a cell to store the liquidity pool related data between UDT and ckb.

Swap ckb to UDT (swap UDT to ckb)
Depending on the ratio of ckb to UDT or UDT to ckb provided to the liquid pool, you can either provide ckb and receive a UDT, or provide a UDT to receive a ckb.

The shared state of the figure indicates that the latest liquidity pool related information cell by all users should be used as input.

There is an undefined fee for every transaction, which is a fixed fee to prevent the occupancy of the shared state.

Create UDTswap
There is one input and three outputs.

The input is shown below.

The output is shown below.

Cell where the UDT is actually locked and stored.

Cell to get the remaining change after cell creation.

After that, all transactions containing UDTswap type script should check below.

whether the UDTswap lock script is used,

the args of the type script match,

Etc., and further checks according to the other situation

Add liquidity pool
There are five inputs and five outputs.

‘ckb reserve’ refers to the amount of ckb that exists in the liquidity pool.

‘UDT reserve’ refers to the amount of UDTs that exist in the liquidity pool.

For a UDT you should add :
UDT reserve * ckb amount to add liquidity / ckb reserve + 1

The liquidity pool ratio information for a user is as follows :
total liquidity * ckb amount to add liquidity / ckb reserve

In addition, upon initial addition of the liquidity pool, the total liquidity is equal to the ckb amount.

Liquidity pool removal
There are four inputs and six outputs.

Swap ckb to UDT (similar to swapping UDT to ckb)
There are four inputs and five outputs.

In the above case, ckb is exchanged for UDT. When ckb and UDT are reversed, same calculation will be used.

‘input amount’ means the ckb or UDT amount you want to provide.

The ‘output amount’ is the ckb or UDT amount that you will receive.

‘input reserve’ refers to the amount of liquidity pool provided by the user, such as ckb or UDT.

‘output reserve’ refers to the amount of liquidity pool that you receive, such as ckb or UDT.

The formula is shown below.

If any of the above two formulas are correct during transaction verification, they will be treated correctly. If both formulas do not match, the verification will fail.

future work
We may make user’s liquidity as UDT and transmit it. UDT to UDT swap is already available through two transactions, but we may make it possible to use one transaction.

Road map:
We propose a 4 month timeline, with 3 checkpoints.

Examples include the ERC-1789 inflation funding proposal, Gitcoin, and MolochDAO, which contribute open source projects/communities to the sustainable development of the Ethereum ecosystem. The key elements of ecosystem financing are a) sustainability b) community consensus c) transparency and d) value parity.

Nervos has a strong ecosystem community. However, to create the Nervos Fat protocol, we believe that a platform is needed for Nervos community members to contribute to the open source project ecosystem.

Growdrop is a protocol that minimizes trust costs and contributes interest to open source projects generated through Nervos DAO. Like the aforementioned model, Growdrop’s community members contributed to various open source projects / communities through the interest generated, and the blockchain protocol provides a long-term sustainable direction.

What we think so far is that the cost of trust in financing is very high. It’s expensive, so you pay a lot of money to maintain all sorts of unnecessary surveillance systems. Growdrop is a crowdfunding solution that minimizes the trust costs of existing third parties, deposits investment funds into DeFi Lending Protocol’s liquidity pool, contributing interest to open source projects and ensuring investor principal.

Given that Growdrop allows third parties to securely operate smart contracts, Growdrop can invest in projects, greatly reduce the risk of supporters’ seed investments, and projects will slowly build communities to help promote public relations and technology development. Here, in the early Ethereum community, it is very similar to the nature of DAICO, and projects can start as a community and receive seed investment and promotion effects. 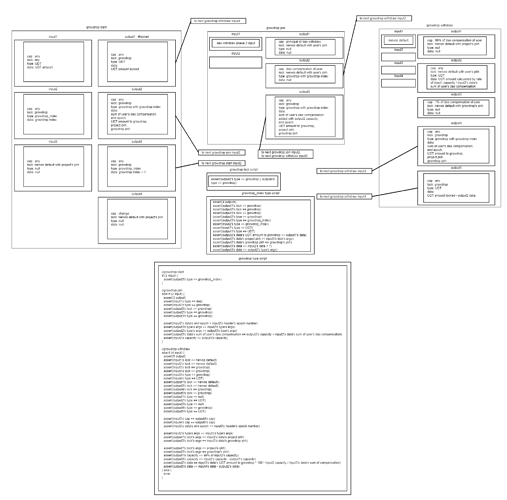 nervos%20growdrop1936×1908 331 KB
Among the above and the below, data field to be entered may be changed, and some of logics may be changed.

All cells in transaction which is interacting with growdrop should have appropriate type script and lock script.

How to create a project

When new growdrop is created, the number will increase by one. A cell to lock up UDT and a cell to sum interest data will be created.

The condition of this transaction is as follows.

There must be only 3 input and 4 output.

The pkh provided as project and growdrop should be appropriate pkh.

The actual UDTs locked up into cell must be the same amount of data provided in cell.

current epoch + 181 The epoch timeout must be added to the cell data.

When the project is created, it finds the output with the latest total interest updated.

This results in three outputs

The conditions of this transaction are as follows.

It must occur within the 181 epoch hours generated by the project.

In addition to the inputs and outputs mentioned above, no other inputs or outputs should exist.

The inputs and outputs for which the total interest is to be updated must both have the same capacity.

The output to lock up the interest should be the same as the type script of #3 and args too. The interest is stored in capacity.

The cell data with updated total interest must equal the capacity of the output with the interest plus the interest on the input.

First input uses the nervos default lock script for transferring capacity to itself.

Finds the output that will hold the previously generated interest and the latest output with updated total interest.

The conditions of this transaction are as follows.

It should occur after the 181 epoch time you generated in the project.

In addition to the inputs and outputs mentioned above, no other inputs or outputs should exist.

The inputs and outputs with updated total interest must both have the same capacity.

Input 2 and Input 3 must have the same type script and args.

The amount of UDTs a user takes should be equal to user interest / total interest * UDTs distribution.

The capacity of the project must be 99% of interest and the Growdrop’s commission capacity must be 1% of interest.

When a user takes UDTs through Growdrop withdraw, the UDTs tied to the output cell whose total interest has been updated must be subtracted by the amount of UDTs taken by the user.

The UDTs bound to the cell will be updated as the user continues to take them, and because they are also shared by all users, they must be updated for the latest output each time.

Roadmap:
We propose a 4 month timeline, with 3 checkpoints.