After running for a period of time in the blockchain network, each full node leaves some data on the local storage. We can divide them into two categories：

The interesting thing is, all kinds of blockchains have different ways to preserve its history and state, and those differences formed their own characteristics. Since the topic discussed in this article is state, and the historical data affecting the state is mainly the transaction (rather than the block header), the following discussion of history will focus on transactions instead of block headers.

Bitcoin’s history consists of a series of transactions which include input and output. The way to change the state of a transaction is to mark some UTXO (those referenced by the transaction input) contained in the current state as spent and remove them from the UTXO collection, and then add some new UTXO (the output of this transaction) to this collection. 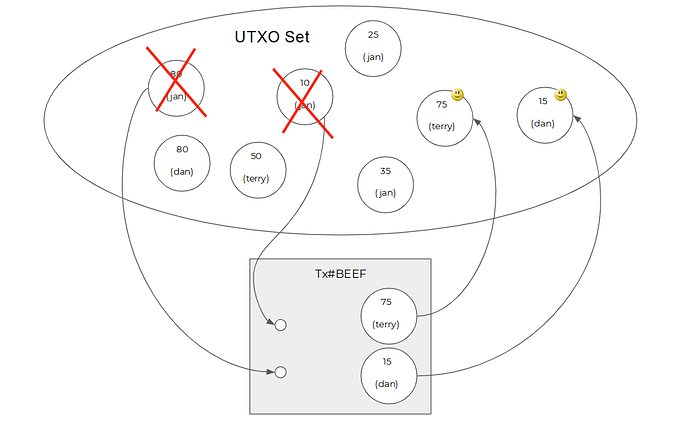 From the diagram, we can see that Bitcoin Transaction Output(TXO, Transaction Output) is exactly the UTXO mentioned above. UTXO is just a TXO at a special stage (not yet spent). The components that make up the Bitcoin state (UTXO) are also the components that make up the transaction (TXO), thus Bitcoin has an amazing feature: The state at any moment is a subset of history, and the data types contained in history and state are of the same dimension. The history of transaction (the set of all packaged transactions, that is the set of all generated TXOs) is the history of the state (the set of UTXO collections for each block, also the collection of all generated TXOs) and the history of Bitcoin only include transactions.

In the Bitcoin network, each block and each UTXO continue to occupy the node’s storage space. At present, the size of Bitcoin’s entire history (the size of all blocks combined) is about 200G, and the size of state is only ~3G (consisting of ~50 million UTXO components). Bitcoin manages the historical growth rate well by limiting each block size. Due to the subset relationship between its history and state, the size of the state data must be much smaller than that of the historical data. Therefore, state growth is also indirectly managed by block size.

Ethereum’s history is also constructed from transactions, a simplified view of a transaction’s internal structure is: 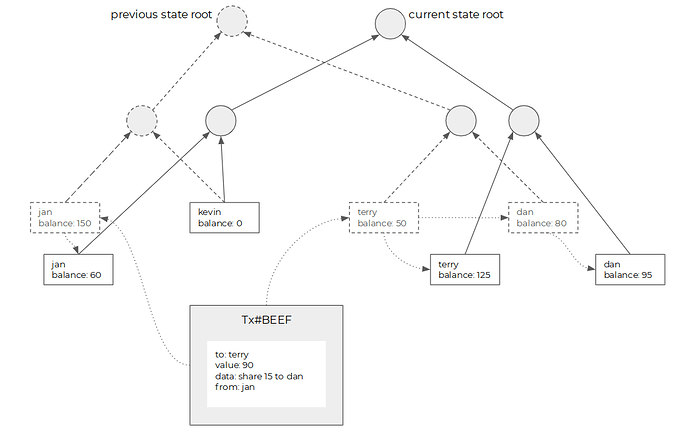 After a transaction modified the state, not only new state is created (the leaf nodes with solid line), but old state is also stored (the leaf nodes with dashed line) as historical states, thus Ethereum’s history contains both transactions and historical states. Because history and state belong to different dimensions, Ethereum’s block headers include both Merkle root containing transactions and Merkle root containing state. (Bonus points: EOS uses a model similar to Ethereum’s account model, but the block header doesn’t include Merkle Tree Root containing state, is this a good thing or not?)

All cost in Ethereum is managed by the gas fee model, different transaction size consumes corresponding gas. And the gas consumed by each EVM instruction not only takes into account the computational overhead but also takes into account the storage overhead. Through the gas limit of each block, the growth rate of history and state is indirectly limited.

P.S. A common misunderstanding is that Ethereum’s “blockchain size” is already larger than 1 TB. But from the above analysis, we can see that “blockchain” size is a very vague definition. If we counted including historical state, then it is indeed more than 1 TB.

But for full nodes, discarding the historical states does not cause any problem. Because every historical state can be recomputed (without considering the computation time) as long as there are the Genesis and transaction history. The real meaningful data is the amount of data that must be stored on a full node, for Bitcoin it’s 200 GB, for Ethereum it’s 170 GB. They are basically in the same amount, and this amount of data can be easily stored on a regular cloud host. So people’s observation that the number of Ethereum full nodes is decreasing is not due to the increasing storage need (the root cause is the cost of computation during syncing, but we’ll not go into too many details here). Considering Ethereum’s historical length (the gap between the current block timestamp and the genesis block timestamp) is less than half of bitcoin, we can see that Ethereum’s history and state growth is much faster.

The Tragedy of (Storage) Commons :

The tragedy of the commons is a term used to describe a situation where individual users with no restriction will deplete a system’s common resource. blockchain nodes share their disk space to store transactions and states. This is precisely a kind of common resource.

(Storage all the nodes pay for saving history and state in a blockchain system is such a common resource. )

For this kind of refreshable resources, we can compensate the node with a one-time transaction fee (for the correlation between handling fee and calculation complexity and transaction size, please refer to RFC0015 Appendix 1).

Different from CPU and network bandwidth, disk space is a long-term occupied resource. The disk space occupied of one block cannot be used by a later user unless it is released by the previous owner. A node will continuously keep the occupied disk space alive but the user of the occupied space doesn’t have to pay rent (keep in mind transaction fees are only a one-time payment). It means users only have to make a small one-time payment when writing data to the blockchain. Afterwards, they essentially have permanent usage rights to a storage system with more availability than Amazon S3. This kind of infinite and permanent storage cost is shared by all the full nodes in the blockchain network.

Because all kinds of DApps operate on the Ethereum blockchain, the phenomenon of The Tragedy of (Storage) Commons is more widespread in Ethereum. For example, at block 5700001 (May 30, 2018), the top 5 smart contracts ranked by storage usage are:

The funny fact is the last one EOS Sale. Even though EOS Sale has already concluded and EOS tokens are already transacting on the EOS chain, the disk space used by EOS Sale has become a permanent part of an Ethereum full node, as a result, part of a full node’s disk resource is continuously being wasted.

We can already observe that without management, intentional or not, blockchain’s disk space is being abused.

In a well-designed economic model, the user should and must bear the cost of storage. This cost is not only proportional to the size of the occupied disk space, but also to the length of the occupied time.

Both historical state or current state consume the storage resources. According to the analysis, we can see that (the state model of other blockchains can basically be summarized as one of them), although Bitcoin and Ethereum managed the growth of history and state, they didn’t control the total size of historical state and current state, and the data will accumulate continually. In this way, it will cost more and more disk space for a full node to run in the blockchain system, and more disk space means much more cost and requirement. Apparently, this would make less miner run the full node and thus affect the decentralization of the blockchain. And this is the last thing we want to see.

You might ask is there any possibility that the improvement of the hardware will exceed the accumulation of historical state and current state? My answer is the possibility is very low. 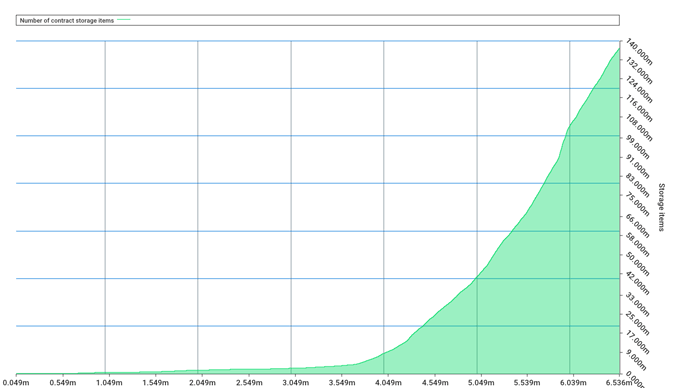 We can see the growth of Ethereum network in this sheet, the amount of state accumulation has grown exponentially. Bitcoin has accumulated from 0 to 3GB in 10 years; But Ethereum has accumulated from 0 to 10GB in 4 years; The current situation is that we have not solved the Scalability problem of the blockchain yet, and that is, the growth rate is just under the condition of blockchain is still a niche technology.

When we solve the scalability problem, and the blockchain technology really gets mass adoption, we will have numbers of DApps and users, what speed will the blockchain historical state or current state accumulate?

Relatively speaking, handling the accumulation of historical data is easy. We can compress these states by decentralized Checkpoint or zero-knowledge proof in the future. And we can even drop the historical state and still keep the blockchain running normally. Handel the accumulation of the current state is a lot harder because it is the necessary data to run the full node.

Some Blockchain projects have seen this problem and proposed some solutions. EOS RAM is a useful attempt to solve the state explosion problem: RAM represents the available memory resources for the supernode server, whether account, contract status or code should take a certain amount of EOS RAM to run.

But the design of RAM also has problems. It needs to be purchased through the built-in trading market, it is not transferable, it cannot be rented, and the short-term memory demand in the contract execution process and the long-term storage requirement of the contract state are mixed together.

And the total amount of RAM has no fixed rules, it more depends on the hardware configuration that the supernode can withstand, but not the cost of the consensus space.

Ethereum community also noticed this problem and proposed Storage Rent solution: requiring users to prepay a rent for the storage resources, which will continue to consume the rent when using the storage resource. The longer it takes, the more rent the user needs to pay.

But there are two problems with this Storage Rent solution:

Solving the state explosion problem is also one of the goals of Nervos CKB, for this purpose, CKB is taking a completely different way with much more changes.