The current Godwoken block interval is ~30 - 40 seconds. This block time is longer than that of Ethereum and other layer-2 chains.

The long block interval causes Metamask and some other Ethereum tools to take a longer time to display transaction results, which causes a poor user experience. The proposed changes will speed up the Godwoken block time and improve the user experience.

This proposal also discusses a new strategy to improve the syncing and submission of layer-2 blocks.

In the early version of Godwoken, we kept the long layer-2 block interval for two reasons: 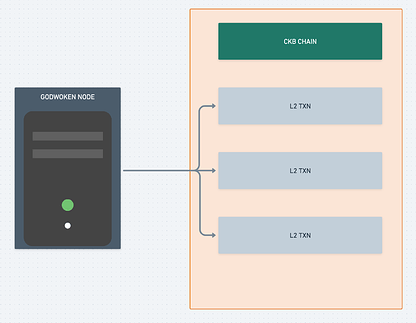 Metamask only starts to update a transaction’s status after the latest block number of the chain is bumped. Thus, since Godwoken has a long block interval (~30 - 40 seconds), Metamask won’t try to query the transaction result even if the transaction is already processed. Ethereum tools don’t exactly behave the same, and this causes some problems for transactions on Godwoken.

In the v0 version of Godwoken, we offered an instant finality feature to improve user experience. Users could get the result immediately after sending a transaction. Unfortunately, users cannot have this experience in the v1 version of Godwoken. To improve compatibility with the EVM, we removed the web3-provider plugin in v1 to support RPC level compatibility. Users can use Metamask or tools to directly talk to the Godwoken chain.

Thus, we believe that speeding up the block time interval production of Godwoken can improve the user experience, increase compatibility with the Ethereum toolchain, and speed up the Layer-2 TPS.

In the current implementation, we use a simple syncing and submitting strategy:

This current process has a bottleneck. After the node sends a layer-2 block to CKB, it stops producing new blocks until the transaction is submitted on CKB, and it usually takes 3 ~ 4 CKB blocks (at least 24s ~ 32s). Since CKB has its unique proposal mechanism (CKB consensus protocol), the 3 ~ 4 CKB blocks to submit are almost the best we can do.

We propose a more sophisticated strategy to separate the block syncing, producing, and submitting process.

This strategy can decouple the Layer-2 block syncing, production, and submitting, removing CKB block time dependency. The submission of Layer-2 transactions is constrained by CKB block space. If Layer-2 produces new blocks fast enough, it will occupy more block space than CKB can supply, and the submission queue will grow, reaching its limit. The node stopped submitting and waited for CKB to package transactions.

The submission, therefore, is this: We can choose a block time that can support a good user experience and does not occupy too much CKB block space.

If we reduce the block time to ~8s, in the best condition, we can easily reach 200 TPS (let’s ignore other factors for now).

We have suggested changes above that we believe will improve the user experience, bring us more inline with ethereum compatibility and increase Godwoken TPS. Please feel free to share your feedback below on the suggested changes.

We should also bring this kind of discussion on twitter to make more people aware of.

Godwoken v1.7-rc has a notable change: accelerate the block speed to for a better user experience.

The average block time of Godwoken testnet_v1 is now around 8s.

Please let us know if your DApp experiences issues with this change. Thank you!