It is believed that the biggest obstacle to understanding the development on Nervos CKB is the UTXO mode. You have to collect live cells, avoid the duplicated input reference, and generate the accurate output cells. By comparison, transaction on account based blockchain like Ethereum is pretty straight forward, users sign the function invoking parameters, then the miners run the VM to calculate the result. This post will introduce a general method for account level operation on Nervos CKB accomplished by otx.

Account model is good at handling shared state update jobs. Imagine a state cell stores some shared information, like the poll statistic data, it would be updated by numerous users simultaneously. A previous solution to this problem is to introduce a two-phase commit process. Users firstly post their intentions on CKB by writing intention data in some specific formed cells, then the aggregator combines all the intention cells with the shared state cell in one later transaction.

It’s natural to eliminate the first phase by using open transaction. Users simply sign open transactions and the aggregator collects them to generate a full transaction with shared cell state transist. The user could get instant response from the aggregator, reduce phase 1 block commitment latency, and ease the throughput burden of layer 1.

Before exploring the details, we should refer to the existing account based transaction. The typical TX structure on Ethereum is illustrated here:

The nonce field is also necessary in our design. Although the UTXO model doesn’t need it, we still have to adopt a nonce equivalent variable because of the simulated account model we adopted. The only reason why Ethereum uses nonce field is to prevent replay attack, the side effect is that Ethereum transactions are force processed serialized for single account. We here achieve the same functionality by including unique input cells in transaction, without sacrificing the transaction concurrency.

We use a fee variable to substitute the gas price and gas limit field. It defines the maximal capacity difference for specific account.

The to, value, and inputs fields are function invoking variables refer to the target smart contract function, token to transfer, and call parameters seperately.

The signature part also implies the sender information, which identifies the account ownership. We use lock script or lock hash to identify an account on CKB.

An important difference between Nervos and Ethereum is the native token ckb on Nervos is not “fungible”, because every cell has an optional type script to constrain or defines its functionality and purpose. So we need also to define which cells an otx should involve, which means an explicit field for the input cells with specific type script.

In the series article #4, we proposed a general otx implementation protocol with the following witness data structure.

We add the optional account call simulation data ahead of the witness data, making it look like:

to, the interaction script definition field should cover the script hash and script position.

The nonce cell is introduced to resolve the replay attack problem. But the existance of nonce cell also bring the potential usability and parallelization problems. Let’s investigate and try to figure out a solution.

What if different otx aggregators try to take the same inputs?
Let’s say a DEX scenario, the user has four live cells, which consist of 200 ckb capacity and 250 DAI sudt in them seperately. The user wants to post two orders, the first order is to buy 10000 CKB with 500 DAI, the second one is to buy 501 USDT with 500 DAI. If the user sent two otx with two different cells as the nonce cell, the aggregators have 2/3 chance to select conflicting cells. So the user could include more cells in the nonce cell field to indicate that which cells must be used in the otx.

The p2p network should verify the validation of the availability of nonce input, the ckb amount on the sender and maybe a small PoW challenge, before adding an otx to the pool or broadcast it out to prevent DDoS attack. The aggregator should monitor the tx pool and p2p network to capture more otxs to accrue more profits. A valid_until tag may be useful for some scenarios, when the aggregator want to clean up the obsolete transactions.

Since the aggregators’ response to this optional data is off-chain and not verifiable, it’s not guaranteed that they will do the PoW check and time invalid check.

Let’s say an AMM DEX which accepts otx orders. The otx order should be like this.

The aggregator collects the otx orders and related live cells, then combines them with the AMM pool cell to generate the output cells. The Nervos miners could verify the full transaction and commit it on chain. 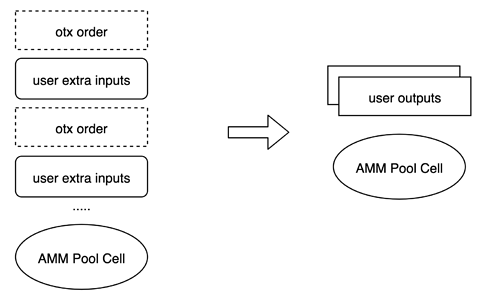